This blog post will explain the workings of the ransomware named Wasted Locker based on 3 different samples. Last weeks I read a lot of articles about companies getting attack by Wasted Locker. Wasted Locker is ransomware used to attack large companies to make ransom demands. These amounts sometimes go up to $ 10 million.

Employees later shared with BleepingComputer that the ransom demand was $10 million. - https://www.bleepingcomputer.com/news/security/confirmed-garmin-received-decryptor-for-wastedlocker-ransomware/

The first 2 samples are protected with a custom crypter, referred to as CryptOne by Fox-IT. To further analyse the unpacked executable I used x64dbg and Scylla to dump the memory to an executable.

WastedLocker is protected with a custom crypter, referred to as CryptOne* by Fox-IT InTELL. On examination, the code turned out to be very basic and used also by other malware families such as: *Netwalker, Gozi ISFB v3, ZLoader and Smokeloader. - https://research.nccgroup.com/2020/06/23/wastedlocker-a-new-ransomware-variant-developed-by-the-evil-corp-group/

The main function executes uses LoadLibrary to load kernel32.dll in memory and GetProcAddress to retrieve the address of the function VirtualAlloc. VirtualAlloc is then used to create a memory with the memory protection constant 0x40 = PAGE_EXECUTE_READWRITE (https://docs.microsoft.com/en-us/windows/win32/memory/memory-protection-constants).

After that, another function writes shellcode to the new memory_region. At the end of the main function, it takes a jump to the created memory_region_offset.

To further analyse the instructions at new the memory_region I dumped to memory region to a file and opened it Ghidra at the specified offset. The crypter writes a “new” executable to a memory region, then uses a XOR-based algorithm to decrypt the code. And then writes the new memory region that contains a new executable to the address 0x00400000 of the original executable in memory.

After the crypter is done it jumps back to the entry point of the decrypted executable. 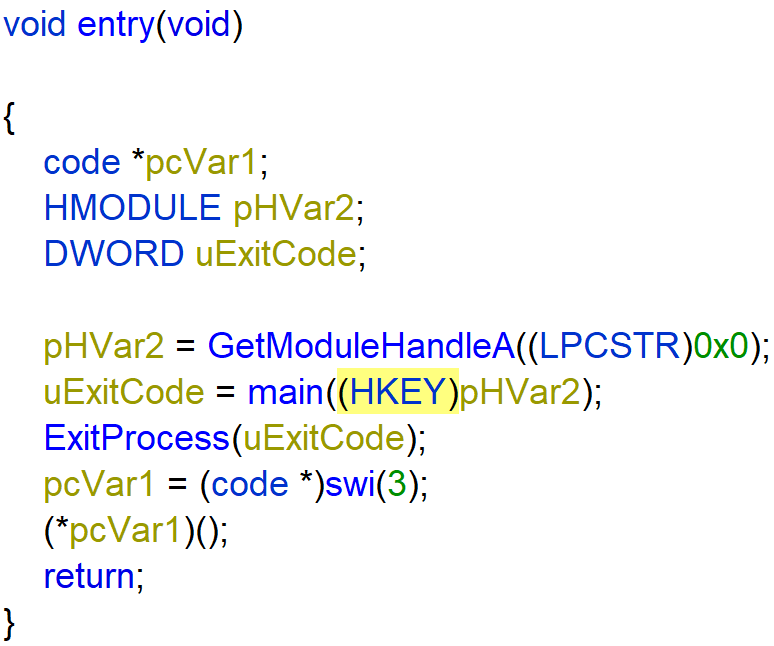 Using x64dbg I dumped the memory to an executable to further analysis the ransomware.

This part of the analysis is based on the sample with the following SHA256 hash. This file was already unpacked but works almost the same as the other samples.

If the major version number of the Windows version (https://docs.microsoft.com/en-us/windows/win32/api/winnt/ns-winnt-osversioninfoexa) is bigger then 5, so Windows Vista or later and if the process is not running with elevated privileges (elevated_flag = 0) it will execute the function elevate_priviliges.

The function elevate_priviliges copies a “random” DLL in the directory C:\WINDOWS\system32\ to the folder C:\Users\<username>\AppData\Roaming\<random> using CopyFileW.

It then sets the file attribute of to new file location to 0x2 = FILE_ATTRIBUTE_HIDDEN.

Instead of just writing the executable to copied DLL, the ransomware uses the file attribute ADS. This a way of hiding the ransomware in a not suspicious file. The function ReadFile reads the file that started the process, then CreateFileW is used to create the ADS in the <random-DLL>:bin and WriteFile writes the buffer that contains the executable to the ADS of the <random-DLL>:bin.

The buffer shows the following in the dump.

After that, a new directory is created in the temporary folder (%temp%\<random>\), for example, C:\Users\re\AppData\Local\Temp\D8BB. Then another folder is created with the name "C:\\Windows " . Note the extra space! 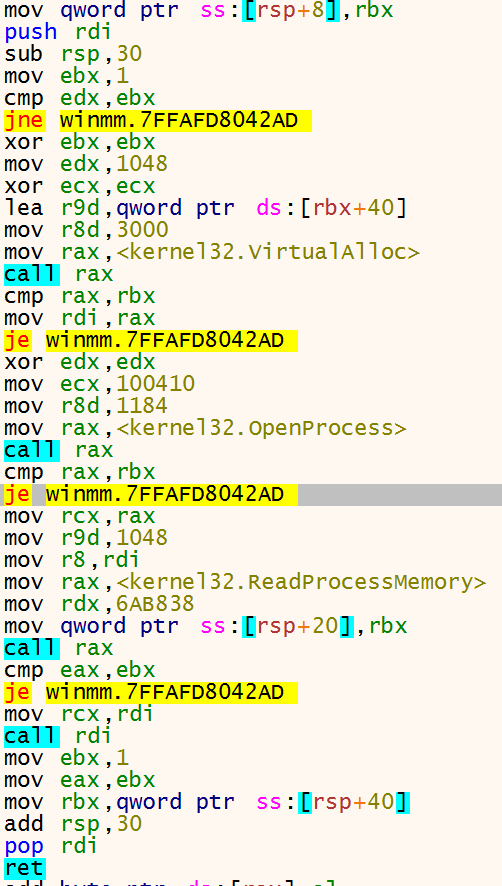 To launch winsat.exe the function ShellExecuteExW is called which starts the following processes. winsat.exe is executed with elevated privileges and loads the DLL winmm.dll and winmm.dll is patched with shellcode that executes the ransomware hidden in the ADS C:\Users\re\AppData\Roaming\<random>:bin. The ransomware uses a vulnerability called DLL hijacking (https://www.bleepingcomputer.com/news/security/bypassing-windows-10-uac-with-mock-folders-and-dll-hijacking/).

To use CryptoAPI functions of Windows the function CryptAcquireContextW is called. The encryption method used is RSA public key alogrithm, because the dwProvType parameter is 0x1 which stands for Cryptographic Provider Type PROV_RSA_FULL.

Then CryptGenRandom is called which fills the buffer random_bytes with cryptographically random bytes.

This buffer is used by other functions that execute the encryption routine.

Instead of copying the file that will be encrypted MoveFileW is used to move the file to <file-name>.bbawasted. The extension is not the same in all samples sometimes the name of the company being attacked is used here.

At this moment I was stuck because I didn’t understand how the files were being encrypted. Luckily Sophos wrote a blog post (https://news.sophos.com/en-us/2020/08/04/wastedlocker-techniques-point-to-a-familiar-heritage/) about the technique used.

Each file is encrypted using the AES algorithm with a newly generated AES key and IV (256-bit in CBC mode) for each file. The AES key and IV are encrypted with an embedded public RSA key (4096 bits). The RSA encrypted output of key material is converted to base64 and then stored into the ransom note. - https://research.nccgroup.com/2020/06/23/wastedlocker-a-new-ransomware-variant-developed-by-the-evil-corp-group/

After encrypting the file the ransomware note is written to <file-name>.bbawasted_info with the key used to encrypt the file. The file update.py is not associated with the ransomware, it is just a random file in my home directory. 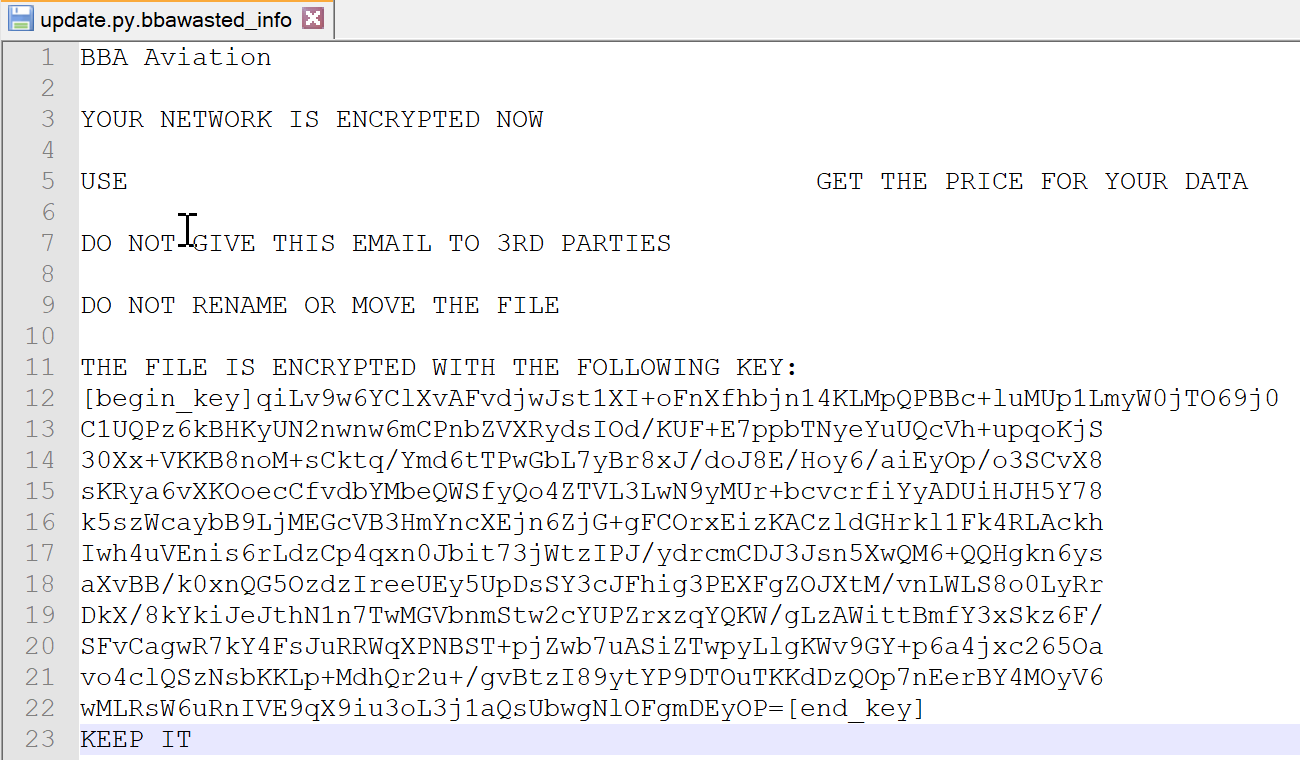 I hope I was able to explain in a technical way how Wasted Locker works. I did not write about the arguments that can be given to the ransomware which executed different functions based on that, but it is already covered in another blog posts in the references. Next time I want to better analyze the encryption method used by the ransomware.